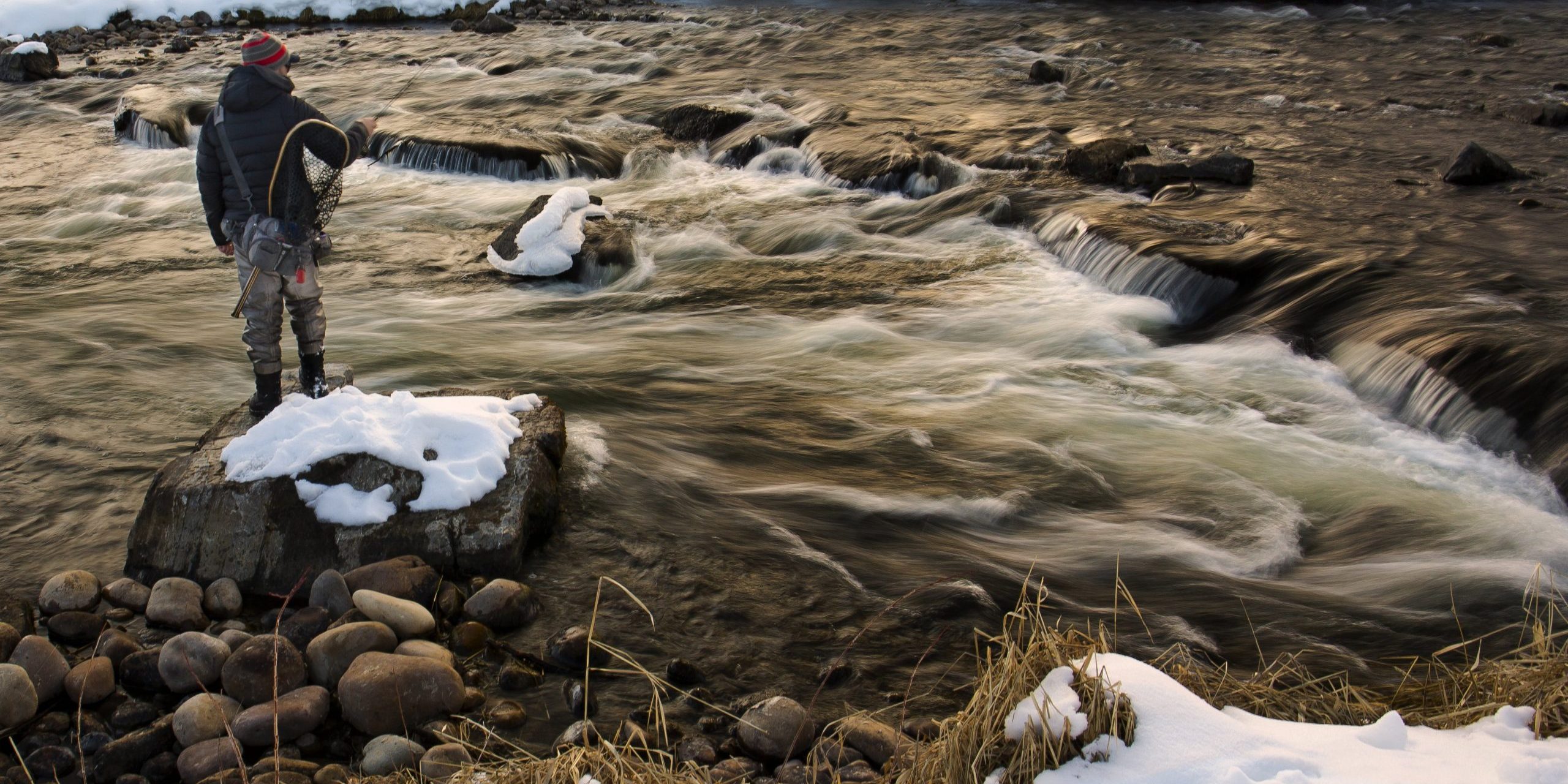 Park City fly fishing report Winter edition. Both the Middle Provo River and the Lower Provo River are some of the best in the United States. Being tailwaters they stay consistently cold and clean most of the year. Perfect for the trout and insect life that inhabit these waters.  Consistent hatches throughout the Winter make for happy trout and great fly fishing. Utah is known for its Winter sports and that includes fly fishing. People are usually shocked to hear that bugs still hatch during the Winter months, In fact some of the best dry fly fishing of the year is had from late January and through April.

The Middle Provo River is famous for its Winter midge hatches. They usually hatch at around noon which is perfect because that’s also the warmest part of the day. The Winter flies start off pretty small (size 26-30). You’ll see these tiny bugs through December and January. As we start to get into February and March they get much bigger with sizes being in the 16-18 range. They say there are about 4000 trout per mile in the Provo River and during some of these hatches you’ll know that to be absolutely true. During the peak of these hatches the Provo River will look like it’s boiling with all of the rising trout. Nymphing before during and after these hatches can be amazing.

The best flies for this time of year will imitate these little bugs. Provo River trout tend to be very hatch specific so you should use flies that are a close visual representation of the actual insect. You’ll want to make sure to have all 3 stages of this bugs life covered. First you’ll want a good larvae imitation. Standard zebra and thread midge patterns will work best. Match the size of the bug that you’re trying to imitate. The bugs are generally grey to black but mix it up with some blue, red or purple patterns too. Sometimes it’s just a matter of making your fly stand out from the others. Next you’ll want some emerging midge patterns that have a little wing sticking out like a bug that is just coming out of it’s shuck. A lot of the time they like a flashy wing like Sparkle Organza or Flashabou. Fish these on the bottom, mid column or in tandem with a dry fly. Some good dry fly patterns for these hatches are the Mother Shucker, Orange Asher and Griffiths Knats.

March 20 2021 – Excellent hatch in the Bunny Farm area! Nymphing has been a little tougher up until about an hour before the hatch. They have been starting around 12:00 – 12:30. Brown shuckers have been my best dry fly the last few times and nymphing with grey midges in 20-24 have been good.

March 11th 2021 – The hatch is getting better and starts around 12:30 and by 1-1:30 they really get going. Nymphing continues to be good before the hatch. They want smaller patterns in the size 24-26 range until the bigger bugs start hatching. Greys, blacks and browns have been good.

March 1st 2021 – Solid hatch today on the upper stretch. There were a lot of fish up well before the hatch feeding on the slightly smaller midges (size 20) that also hatch this time of year. Buffalo midges were on the water around 12:30 and nymphing was great pre hatch as well as during the hatch. Brown and black Mother Shuckers worked great.

February 24th 2021 – Things are really picking up on the Middle Provo River. Great midge hatches with some Buffalo Midges starting to make an appearance. You’ll find fish rising all morning with the main hatches starting around 10-12 depending on where you are. River Road to the dam has been great. Mother Shuckers in grey, brown and black have been deadly. Nymphing with straight hook midges in black, dark grey and brown size 24-20 have been good all day with the morning being best. Tight Lines!!

The Lower Provo River report for the Winter months are about the same as the Middle Provo with a few exceptions. The midge hatches will start off a little slower here until February. Look for them during the warmest part of the day, generally 11-2. You’ll see some good hatches but not quite as consistent as the Middle until late Winter, February-April. Once they do get going you will see sheets of midges on the water and trout eating mouthfuls of bugs instead of just one at a time. This is a good time to use big cluster midge patterns.

Nymphing on the Lower Provo should be pretty good. Look to match the hatch with midges from size 22-28. The Lower is also a sowbug factory and they will eat these all year long especially in the colder months when there aren’t as many options around. Use smaller sowbugs in various shades of grey from December-January size 24-20. As winter gets closer to Spring you can start using bigger sizes 20-16. The brown trout will continue to spawn through December so egg patterns should continue to produce fish into January. I like to use small orange and peach colored glow bugs in sizes 16-20. Be mindful this time of year and be aware of spawning beds.Use caution while wading to not walk through the redds.

April 1 2021 – Fishing has been absolutely amazing! Nymphing is great and the Blue Winged Olive hatch is in full force. Lots of fish rising all day with midges in the morning and BWO’s around 1:30 through 4 pm. Small brown, olive and yellow midges with a copper bead are nymphing great all morning and then Blue Wing emergers throughout the afternoon. Comparaduns and noseeums are crushing fish during the afternoon hatch and Mother Shuckers or various Griffiths Knat type flies are great in the morning. Tight Lines!

March 20 2021 – The Lower Provo has been on fire! The famous Provo River blue 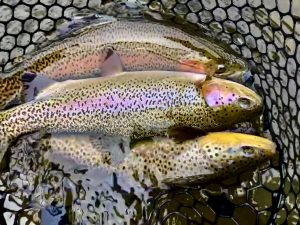 winged olives have been making their annual appearance and the trout are all over them.

Look for them at around noon with cloudy days being best. Great dry fly opportunities going throughout the afternoon and nymphing has been great too. Midges in the morning and blue wing emergers in the afternoon. I’ve done best with black and grey patterns.

March 11th – Fishing is great. Midges in the morning and some blue winged olives starting to show up. Nymphing has been excellent and some risers in the afternoon.

February 24th – The Lower Provo River has been awesome. Good midge hatches on the upper half of the river and great nymphing throughout the whole river. Mother Shuckers, Orange Ashers and Griffiths Knats have been great. Nymphing with sowbugs and small copper bead midges in size 24-20 has been a deadly combo with yellow and brown being best. Lots of big rainbows being caught. Tight Lines!!

As a side note. I was featured on KSL Outdoors. Check it out.

Take a break from some of the greatest snow on Earth for some of the best Winter fly fishing on Earth. Contact Jeremy Allan Fly Fishing.