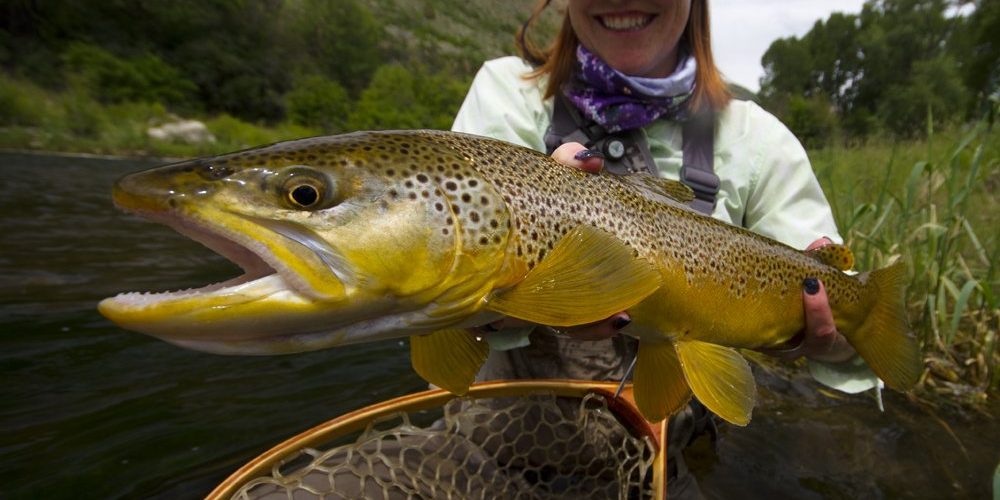 Utah’s Green Drake hatch is one of the most sought after and anticipated hatches of the year. Big trout, eating big bugs in the heat of Summer is what fly fishing is all about. This mayfly is one of the biggest bugs to hatch throughout the year and brings those seldom seen big trout to the surface. Two of my biggest dry fly caught trout were during the Green Drake hatch. One was a 26 inch brown trout and the other was a 25 inch brown trout. It’s one of the best times of year to try and find a monster trout on Utah streams.

The big mayfly starts hatching on some of our smaller streams in mid June shortly after runoff ends. Once they start you can almost set your watch to their hatch time. You’ll usually see them at exactly 11:30. The hatch can go from 30 minutes to a couple hours depending on the day. Fishing can be truly amazing during the actual hatch but if they’ve been hatching in an area trout get used to seeing them and will eat one all day.

The hatch will progress up stream quickly. If you time it right you can start at the bottom of a river and fish it for a few weeks following it all the way to the top. They will continue to hatch in an area for a week or so but the peak of the hatch will move upstream every couple days as the water temperature warms. Depending on the year it generally lasts for about two to three weeks. If you know where to look you can start fishing it in mid June on some smaller streams and then finish in late July on the Middle Provo River.

The insect is big pretty big compared to other mayflies. It’s a size 10-12 and is like a T- bone steak compared to some of the other bugs they normally eat.

The nymph starts off as a brown color and turn black just before emergence. You’ll know they’re about to hatch when they get a whiteish split in their wing case. Like other mayfly hatches, trout will eat the emerging nymphs pre hatch. Then switch to eating the adults off of the surface. It’s sort of an awkward bug while it’s first trying to gain flight. You’ll see one tumbling through the current causing a trout to explode on it before making it into the air.

My favorite dry fly pattern for this hatch is the Hairwing Drake. It floats great and is a pretty good imitation. Use sizes in 10-12. Also an olive Stimulator works great.

For nymphs I like split case patterns in black, brown and olive. Again use size 10-12. Make sure to use bead head versions as a dropper behind your dry fly. This will catch those trout still focused on emergers.

I was in this cool film back in the Four Seasons days. It’s on the Middle Provo Green Drake hatch. Check it out.